Tonight, we went old school for movie night and watched E.T. with the kids. Its been years since I last watched it, but it’s still as good as the first time I saw it as a 10-year-old kid in 1982. Yes, I know that dates me big time.

I dare say it may even be better now, or at least it’s way more entertaining watching it as a Mom with the three girls. Even though this movie was made nearly 30 years ago (gasp!), my girls liked it as much as I did the first time I saw it. They laughed at the same things I laughed at, covered their eyes at the same scary parts, and asked the same questions I’m sure I asked my parents. The only thing missing was eating Reese’s Pieces during the flick.

As good as E.T. is, I’m not sure what I loved more, the actual movie, or how classic toys like Speak and Spell featured in the film, brought me right back to my childhood. 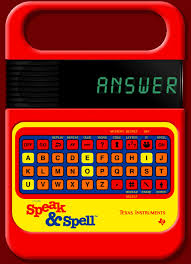 I wonder if the girls will do the same thing in another 30 years, and reminisce about their Leapster games.

It was also a trip to see a very young Drew Barrymore looking cute and as innocent as can be.

I’m guessing she was about five or six, about the same age as Erin is now.

I know Van and I only have a limited amount of time that the girls will want to hang out with us and enjoy old school family movie nights,

so we’re making the most of it while we can and showing them some classic kid films. Last week it was Sound of Music. (The kids haven’t stopped singing “Do-Re-Mi” yet.)  This week it’s E.T. Who knows what the next movie will be, but I’ve got some ideas.