Last Saturday was one-on-one time with Erin. Now it was Olivia’s turn, but for all the wrong reasons. We’ve spent the last several nights staying up late watching movies and playing games. In the hospital.

What we all thought was a nasty stomach bug wreaked havoc on the poor kid. After two full days of throwing up I took her to urgent care last Sunday where she was pumped with fluids through an IV and given anti-nausea medicine. Unfortunately the medicine didn’t work and the following day we headed to the ER. That was an awful experience. We spent 5 1/2 hours there and were sent home with a prescription for a different anti-vomiting medication. A suppository. Oh joy. Even that didn’t help. Shockingly, through it all she remained in pretty good spirits. She even worked on some of her homework.

Tuesday, she still wasn’t getting better so we headed to our pediatrician, not wanting to relive our awful experience at Sequoia ER. The pediatrician thought her symptoms could be strep, and low and behold the test came back positive. Since she couldn’t hold anything down, she had to get two shots of penicillin, one in each butt cheek.

I had my fingers crossed that she simply had a bad case of strep. We went home and she got down three sips of broth. I know it doesn’t sound like much, but it was the most she was able to keep down over the last three days. I even thought about heading back to work. Unfortunately, 20 minutes later she started vomiting again. After consulting with our pediatrician, we headed back to the hospital to get blood work at the lab. This time we were in and out in an hour. The doctor called back with the results. Olivia needed more fluids at the ER. This time however, we went to Lucille Packard Children’s Hospital. Not surprisingly, Olivia didn’t want to go. Hell, I didn’t want to go, but it was worse seeing your child so sick.

This time they didn’t mess around. She got hooked up to an IV, and by 11:00 pm she was peeing again, something she hadn’t done since Sunday. 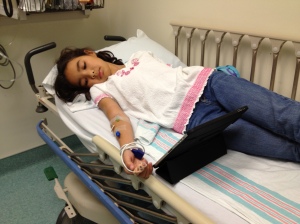 Unfortunately, she was still throwing up so the doctors admitted her. And that’s where she and I stayed for 4 nights and 5 days.

As awful as it was to be in a hospital, I was so glad to be there. It took some time to get the diagnosis, but early on they were able to eliminate several possible scary scenarios. By Wednesday, doctors had it narrowed down to three possibilities. One, after so much throwing up early on, she couldn’t stop. Two, an obstruction in her esophagus, or three an allergic reaction caused her esophagus to narrow.

We were all hoping it was the first possibility, but it would take time to tell. On Thursday, doctors gave her an anti-anxiety medication to see if it would help settle her and her stomach. I never really thought she was psyching herself out of being able to hold down food and water. She’s just not that type of kid. She also didn’t seem nervous when we asked her to try drinking something. The medication certainly relaxed her, a little too much. She turned into what seemed to be a drunk 9-year old. Needless to say, we didn’t try that again, but that meant doctors were going to have to sedate her and check out her insides with a camera.

That happened on Friday, and although I won’t show the pictures, everything looked beautiful. Well at least as beautiful as your insides can look. That meant her body took matters into its own hands and wouldn’t let her keep anything down until it was good and ready. It was apparently good and ready on Friday. That’s when  she started holding down food and water. (mostly)  It started with a few sips of water late in the morning. By 1:00, she was hungry. Starved you might say. We ordered her some bread and she also craved a blueberry muffin. When the food arrived she ate like she hadn’t eaten in days, which she hadn’t. She was still hungry so she asked for Chex Mix. Which we obliged. Everyone was shocked at her appetite. When the nurse came in to check on Olivia, her jaw literally dropped when we told her what she ate. In hindsight, we probably should have taken it easy with her first meal in a week because later that night, we paid the price. But that didn’t stop this determined kid who just wanted to go home. She said she was still hungry so she ate a banana and sucked down a popsicle.

Olivia knew she wouldn’t be able to go home until she could eat and drink. Whenever a doctor, a nurse, even a volunteer stopped by her room to check in on her, her question was always the same. “When can I go home?”

Her smile back at home says it all. She probably has never been so glad to be back with her sisters, and vice-versa.

Throughout this whole ordeal, Olivia has been a trooper. She even said that her room was kind of like a hotel room, but with a lot more equipment. We also happened to be in the children’s oncology unit because that was the only place with an empty bed. That meant a bigger, quieter, private room, although when you’re at the hospital with your child, no amount of quiet will help you get a good night sleep.

Now here’s the time for some shout-outs. If Lucille Packard was indeed a hotel, I’d give it a five-star rating. The care was exemplary not just for Olivia but also for her stressed out parents. I truly hope I never have to return for such a long visit again, but if it does happen, I know my kids will get the best care possible. Our pediatrician went above and beyond the call of doctor duty. She came to visit Olivia on her day off, gave me some of the best advice on what to ask the doctors, and more importantly what to request and demand as an advocate for my daughter.

With the exception of a few friends, family, and co-workers, we stayed pretty mum. However, the people we did confide into were a constant source of strength for us. A hospital is a pretty terrible place to be with your child, but the calls, texts, emails, and a visit from Olivia’s friends made it somewhat bearable.

The younger girls were also pretty darn amazing. They took my and Olivia’s absence mostly in stride, and from what I’m told tried to be as helpful and well-behaved as a 4 and 6-year-old can be.

My husband deserves kudos for powering through his own stomach virus to watch after the other two while I stayed with Olivia, and for schlepping back and forth to the hospital countless times over the last several days.

Finally, to Olivia. The numbers say it all. She endured 3 separate IVs, 2 shots in the butt, and 1 blood draw in the span of five days. We stopped counting the number of times in a day she was throwing up or the number of times doctors poked and prodded her. Even with all of this, she mostly kept up her spirits. If roles were reversed, I know I’d be a hysterical mess. Instead of wallowing in her sickness, she took everything in stride, and even kept a sense of humor. I’ll never forget during her final IV draw, the nurse spilled a little bit of blood which caused her to ask him, “And you call yourself a specialist?” It was a good question since he was considered the IV expert.

Now that we’re all home, I couldn’t be happier. As much as I like occasional one-on-one times with my kids, this is where we all belong. At home. As a family.

One thought on “Unexpected One-on-One Time With Olivia”