He’s cute, he’s mostly lovable,  and if he can find the smallest of openings he’ll go through it. No, I’m not talking about my husband, I’m talking about our dog. Since he is part poodle, we knew he would be smart. Apparently he’s using his smarts to become the runaway dog.

Within two days of adopting Buster, he busted out of our gated back yard.

We figured as long as we were outside with him, he wouldn’t try to escape. We thought wrong. At least this gave us a chance to see how he was getting out. Since he’s 90% hair, he had no problem slipping his skinny, yet hairy body right through the bars of our gate. As the weeks went on, he didn’t even pause to break out. He’d get a running start on our driveway and simply jump through one of the openings. He may be a smart dog, but he’s just a dog, it couldn’t be that hard to keep him corralled right? Wrong. After we all tired of running through the neighborhood trying to catch Buster after one of his many escapes, the husband bought some mesh and attached it to the bottom of the gate in attempt to keep him from getting out. It worked for about five minutes. The terrier in him used his jumping skills to leap above the mesh and out the gate. You may have heard about a new American Heart Association report that says that owning a dog may reduce your risk of heart disease.  I’m convinced my heart is much healthier after running after him.

Since the mesh didn’t work, the husband had the ingenious idea of buying a retractable metal gate. Viola! It worked. But now Buster was pissed. Really pissed. He doesn’t want to be fenced in. As I like to say, he doesn’t want to have any boundaries to get his puppy out. So what did that dog do? He found another way to escape. Soon after I got home from work last night, the kids came running inside yelling, “We can’t find Buster!” I went outside and started calling his name. He didn’t answer, but our neighbor behind our house did. Our crazy dog slipped through a crack in our backyard fence and made himself right at home at our neighbor’s house. We’ve since covered the crack, but I have no doubt he’ll be looking and finding another opening to run free.

It’s a good thing Buster is cute and lovable. 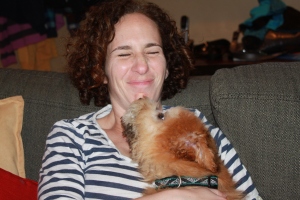 One thought on “The Escape Artist”